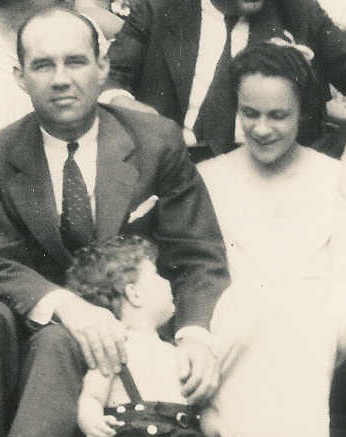 The above photo is of Minor S. Harris, Mike Harris, and Anne Cameron Fleming Harris, from one of the July 4, 1936 Green Mont shots.

Mother , youngest of the Green Mont family , was born in 1904 at the tail end of the post Civil War / Victorian Era and beginning of transition  from Agriculture to Industry. She died at 98 in 2002 as this country moved  from Industry to Electronics and Electronics .

Green Mont became electrified and mechanized , there were two World Wars and two ‘Police Actions’, tractors replaced teams of horses, automobiles replaced buggies,
paved roads became the norm, airplanes were invented and took her to California and the United Kingdom, she saw the horrors of mustard gas and the atom bomb, the social mores became liberal, civil rights brought change to class and caste. Through all of this she adapted; raising and lowering her hem accordingly – except for her social standards to which she hung ferociously. Her rules of propriety never changed.

I really know little about her childhood. Green Mont, to her, was always Camelot, and her mother the epitome of all that was gracious and good.Like all before her, she was home schooled until sent off to either Holton Arms or Madeira (the latter, I think) for finishing school. At some point she was sent off on a cruise to Italy, where she almost drowned. Many young women ‘did Europe’; I think Ammere disapproved of Mother’s current suitor and sent her off to nip that romance in the bud.

She moved to Richmond sometime in the twenties, had a job, and met Minor Sadler Harris. How this romance came to be- much less marriage- I will never know, but marry they did in November 1929. Her father had died in May of that year; Green Mont had taken on a different persona.

The newly weds moved to Philadelphia with Larus & Bros.; not long thereafter to Boston. Some time in the early ‘thirties Sam Carter visited them for a few weeks and found Boston to be a great city to visit. Possibly the Carters can elaborate. As far as I know, Mother went to Green Mont for a large part of every summer. I was born in 1934 .

In the late ‘thirties they bought 57 Monmouth St. in Brookline. (This house still stands; it can be googled) We still went to Green Mont every summer- even during the WW II. Things stayed that way until 1946, when the bottom fell out from under our lives- hers especially.

Ammere died in December 1945, my father in February 1946. Father had been promoted back to Richmond, so the move had been planned for that summer. I believe they had planned to buy a cottage next door to Homewood, and apparently had bought a home in West Hampton (western Richmond suburb near my father’s boyhood home on Three Chopt Rd). All of these plans fell apart at his very unexpected death. At this point there really was no reason to move to Richmond, but Mother stored the furniture and moved in with her mother in law anyway.

The only things wrong with this plan were that she really knew little about Richmond, and she and her mother in law cordially disliked each other. If I could have had a vote in this she would have moved to Green Mont where Uncle Lee was living very much alone in a very large house. But this was not to be. I was sent to board at St. Christopher’s and summer at Camp Virginia. Like other parts of her life, there are lots of things I will never know..

Mother was happiest at Green Mont. The summers there with Uncle Lee, and her sisters nearby, transformed her entire being. I wish she had made the move in 1946
I will not beat this horse any longer; she made a life for herself in Richmond  and spent fifty years there, outliving all her generation of friends as well as family.

If any one has anything they would like to add  about Anne, a story or maybe just a memory, please email it to me and I’ll post it. It would be so appreciated. Thanks.

One thought on “Anne Cameron Fleming”