…as remembered by Beverley Carter Coffman.

“Sam” was born at Ravenscroft on July 17, 1921. His father, Samuel Henley Carter (called Henley), was managing the Ravenscroft farm while his mother, Frances Fleming Carter, was in charge of supervising the construction of the home. The Ravenscroft property was owned by Frances’ Uncle Rob Downman (the younger brother of her mother). Because the Downmans still lived in New Orleans, the Carters took care of the property and lived there until it was eventually sold in the late 1920s.

When Ravenscroft was sold, they moved into Marshall to a home called “Sudley” which was adjacent to “Meadow Grove”, the home where Henley had grown up with his parents, James Alexander Carter and Mary Henley Carter. While living at Sudley, Sam’s father died suddenly at the age of 58. Sam was only 10 at the time. Shortly afterward, Sam and his mother moved to The Plains where they bought Homewood. By this time, his sister, Harriot had married Lomax Gwathmey. Sam went to local schools until he was 14. He went to Episcopal High School in Alexandria, VA where he graduated in 1938.

He began his college years at the University of Virginia in the undergraduate program and continued on there in the Medical School until his graduation in 1944. It was while at the University of Virginia that he met Katherine Kivlighan on New Years’ Day in 1942. He was apparently quite ‘taken with her’ from the moment they met as he invited her a couple of month’s later to a house party at Virginia Beach. His good friend said, “Sam, you can’t ask Kit to the house party unless you are serious about her…She’s Louis’ girl…” Sam replied, “Oh, I’m serious about her. I intend to marry her.” And as they say, “the rest is history.”

Sam joined the Air Force following medical school graduation. He and Kit wrote daily letters while he trained for his duties in the Air Force and she trained for hers in the WAVES. They were married on March 30, 1946 and spent the first year of the married life in Fort Leavenworth, Kansas, where their first child, Samuel Henley Carter Jr, was born.

Sam was released from his commitment in the Air Force after 22 months and the family moved to Roanoke, VA where he started his residency at Roanoke Memorial Hospital. It was there that their next 3 children were born…Ann Beverley (Beverley), Joseph (Joe) Kivlighan, and James Alexander (Alex). As he completed his residency, he was “re-called” into the Air Force for the Korean conflict. At this time, the increasing family went to an Air Force base at Fort Walton Beach, Florida. They lived there for about two years where they welcome little Richard Bland Lee (Lee) Carter.

A few months before Sam was discharged he made the trip back to Virginia to investigate a possible medical practice that had opened in Louisa. On his way through Staunton, he stopped to spend the night with Kit’s parents and to see an old Medical School friend, Tom Bell. Tom, upon hearing that Sam was planning to go to seek out a practice in Louisa, took him out in the country (Fort Defiance) to meet his friend, Bill Painter, who was just starting a country practice there. With a simple handshake, the two agreed to become partners and they built and opened their practice the Fort Defiance Medical Center in 1954. Together they practiced General Medicine there for more than 30 years. 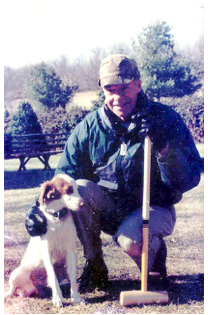 Sam was a true country doctor. He made hospital rounds every morning; he saw patients throughout the day and even went back every evening after dinner for night ‘office hours’. He did reserve Thursday evenings for ‘family night’ where the 8 children would eagerly gather around the dining room table for either the exciting showing of home videos that Sam had taken with his movie camera or, even better, study the stars on the ceiling made by his new constellation projector!

Sam worked very hard but always managed to get in a little hunting (quail and grouse), a little fishing, and even some trapping. He would set his traps in nearby Middle River and check them early in the morning (around 5 am) to see if he had caught any muskrats. He caught enough to have capes made for his mother and his wife!

In about 1970, Sam helped his son, Tom, plant about 100 pine seedlings for a school project. Tom was 12 at the time and was long gone before those little seedlings needed tending and shearing. Sam had always wanted to be a ‘farmer’ and now he was in the business. The Carter Christmas Tree Farm had just begun. By 1978, the first little trees were large enough to harvest and so he hung out the sign and began a ‘choose and cut’ operation. His daughter, Bev and her husband, Steve, had recently moved back close to home and they began helping out. By 1985, The Carter Coffman Tree Farm was in full swing during the Christmas season. Sam, Kit, Bev and Steve worked hard during the pre-Christmas rush and the summer shearing but it was Sam who kept up with the mowing and the spraying. It was at about this time, that Sam took down his MD Shingle and became a full time farmer. After all, he “had more fish to fry”.

Sam became an Augusta County School Board member and served two terms. He was a member of the board of Hospice of the Shenandoah. He helped to start a Bereavement Camp for young children who had lost significant people in their lives. And he was instrumental in creating a Hospice House for local patients in Augusta County. You might say he “never let any grass grow under his feet” in retirement as he stayed quite busy.

He also managed to do some traveling with Kit. He loved seeing the United States. They would take off from Virginia and make their way slowly to California where they would visit their youngest daughter, Katie, and her family in San Diego. They always managed to take a different route out and back so they could see the country. And whenever they arrived home to Orchard Hill, they would both say, “There’s no place prettier than the Shenandoah Valley.”

Sam died on January 26, 2006. He had lived life to the fullest and left behind many people (both family and friends) that respected and loved him. A note from one of Kit’s friends after his death said, “Sam Carter was everyone’s dream of a husband, father, grandfather, doctor and friend.” And that about sums it up…he was truly special.

As most of you know, we are a pretty competitive family. We actually fought for this honor—to be up here. Note, the girls won!

But what you may NOT know is that all of us have an extra emotional gene. So as Pop would say…”oh no, it’s time to get out the buckets, umbrellas and galoshes.”

So Katie is my back up just in case my floodgates open.

Certainly, this place, Emmanuel Church, has often been the site of many happy occasions for me, Mom, Pop, and all our family. We have celebrated family baptisms, confirmations and weddings here. And today, happily, we are here once again at Emmanuel to celebrate… because today we will celebrate Pop’s life.

Now if Pop were here, we would never get away with giving him a eulogy. Pop was NEVER about self. His focus was always on others. Was that because he had so many children? Or so many patients? Not at all, his selflessness was innate. But the more good he did and the more things he achieved, the more unselfish he became.

Pop’s connections with people were not just casual. He didn’t engage in “small” talk. If you engaged in a conversation with him there was thought, wisdom, and sincerity involved…and lots of listening. As a matter of a fact, because he was such a genuine listener, natural pauses in the conversation allowed us time to process our thoughts and get to know ourselves better. Silences with Pop were never uncomfortable.

Pop always listened to all sides of an argument or discussion before making a decision– whether it was related to an important school board decision or… to determine how many weeks one of us would be grounded after breaking curfew or wrecking the family car again…. He was tolerant of those with whom he didn’t agree. And he was proud to have such a diversified group of friends. .

Pop was never judgmental: almost. Now this is something about Pop you may NOT have known. He had a sweet tooth. he especially loved chocolate cake…my chocolate cake. Now having just said that he was not judgmental, that was NOT true about my chocolate cake. It was forever inspected, tasted and judged. And it was NEVER perfect. Because we had an agreement. If I could perfect it, I could stop making it. After taking a bite he would always say, “you’ve almost got it…keep tryin’.”

After Pop’s retirement, he wanted to use his talents and his time to give back to our community. He dedicated his newly released time to the Augusta County School Board, the Valley Alliance for Education, the Kiwanis Club and Emmanuel Church. But his volunteer service to Hospice was probably his most satisfying work. Pop served on their board and also on the Camp Dragonfly committee. Volunteering at the annual Camp Dragonfly weekend was a highlight for both Pop and Mom over the past seven years.

Recently, my brothers, sister and I have all had the opportunity to have long heart to heart talks with Pop. We have all learned more about him because we took the time to sit and listen…after all he taught us to do this. In one of these conversations, Pop said that he had four things of which he was most proud. First, he was proud that he married my mother. Second, he was proud of his family. (“They were mostly okay,” he joked.) Third, he was proud of his medical practice and finally, he was proud of his service to the community. That’s a pretty short list for such an accomplished man. If he allowed us to make the list, it might fill a book!

Over the last two months, my parents have felt like they have been given the gift of time—kind of a strange way to look at life when you know your time is limited. But Pop asked all of his children and grandchildren to come home. In his back room, for weeks, we celebrated birthday parties, had Mexican fiestas, welcomed visitors and shared memories. Pop didn’t miss a moment….or a margarita. Mom and Pop felt that the time they had to be together these last two months, to talk about the future, and to have their family be with them has been a gift for them.

Pop has been many things to all of us. He has taught us by example and by quiet encouragement. His integrity and his kindness will continue to guide us by the seeds he has planted within us and in turn we will plant those seeds again in our relationships with others. The cycle continues. So whatever he has taught you, pass it on.

I am going to conclude with a quote from a note that I received from a friend following Pop’s death…”what a wonderful man…a great guy…Sam Carter was everyone’s dream of a husband, father, grandfather, doctor and friend.”

They aren’t my words, but I couldn’t agree with them more.