My brother, R. B. Lee Rust, has a clearer memory of where that 1/4 ton of sand we picked up from Piedmont Lumber in the 1931 Model A Ford pick up truck was dropped off. He thinks it was not for the bridge project but for a sandbox, up under the tree next to the mounting block. This, I come to learn, was the traditional location for a “sand box” at Green Mont. Lee points out that the driveway bridge construction took place the following year, 1962, when our new farm manager, Bernie Lee (no relation), was in residence. And, Bernie was certainly a key figure in that bridge. (It is interesting for me now to think that that “old” truck was only 30 years old when we made that trip to The Plains. Lee still has that truck, by the way)

Bernie Lee had worked for my father in New Hampshire. He and his family moved down to Virginia when he was signed on as our new farm manager. I have a feeling that this must have been post “dairy”. I don’t know if Bernie had any farming experience but he was a welder extraordinaire and there was always something that required welding. His very heavy New England accent must have caused quite a stir in rural Virginia. (I’m trying to remember everyone’s name. Their son’s name  was Gary. Either the mother or daughter, maybe both, was named Carol. The 2 kids and I were playmates. We would build forts in the hay bales. For some reason that used to upset everyone. Maybe we were breaking too many bales.)

Back then, there was an aging wooden bridge crossing the little creek on the driveway. It probably was not much more than a few rocks, a few logs and a few planks. Bernie Lee cut an old fuel tank in half to form the new span. Another component, that seemed to be a basic building block of Rust life, were these immensely heavy, solid concrete blocks.

In the late 1950’s, while living in York Pa., my father bought a “Fallout Shelter” that had been erected as a display model at the York Fair. I guess he got it cheap. This was in the midst of the cold war, nuclear threat age. (Seems like were entering one again.)

I remember doing “duck and cover” drills at Valley View Elementary School in York,   where I was from 1959 to 1962. Can’t recall if we were still doing them at the Lincoln Avenue school in Pittsford, NY in late 1962, but I think so. It was a strange time. Knowing what they knew about atomic blasts, it was pretty lame to think that everyone was going to buy crawling under their desk as adequate protection. Even as a 6 and 7 year old it sounded a bit fishy. Now we know it was just  “put your head down between your legs and kiss your ass goodbye”. (Keep your fingers crossed this isn’t all becoming an issue again.)

Our father had taken some sort of Civil Defense classes. Whatever certificate the class awarded came along with a hokey masonite helmet emblazoned with the Civil Defense triangle and a little “pocket” scope you could carry in you shirt pocket for quick access in case you needed to see if any radioactive fallout was lurking about. I think that was also when he got the 303 Enfield rifle, with the modified stock; in case there were any Communists lurking about as well.

Anyway, the missing component to family security was clearly the fallout shelter, and now we had one. It was delivered to 354 Pine Hill Lane and stacked on the kitchen porch, where it sat. It sat there for a long time, keeping us safe.

After Green Mont came into our lives, and somebody wanted the porch back, this massive pile of incredibly heavy solid blocks and long precast lintels (that were the roof pieces) was overloaded onto the company truck and hauled down to the farm where they were piled up again.

Whenever there was a need for a concrete block, these were called into action. Such was the case when the construction of a new bridge came up. Don’t get me wrong. These were great blocks. They just weighed 70 lbs. apiece.

In 1965, a fallout shelter was built under “New Green Mont” (it is still there, FYI, having survived the fire. Come to think of it, I guess that’s what it was supposed to do). I’m that not sure how many, if any, of the York fallout shelter blocks were actually used in its construction.

It was maybe a year or two before the bridge that we got the John Deere back hoe. It may have been purchased for some radio station trenching project, ostensibly, but it was almost immediately overloaded to the farm and put into service digging drainage trenches through the front field. There was a spring there. Tiles had been put in there long before to drain it to the stream, but it had always been wet. Tractors would get stuck in there while mowing.

It was when those trenches were being dug that I first remember all the colors of the clay in the soil. There was not only the red, but there was yellow and greenish-blue. And the clay content was enormous. It was very plastic. I collected some of what I thought were especially colorful globs and made an ashtray for my brother Bill. I baked it in the Thermador electric oven.

All of the important elements for the bridge were now in place: an old oil tank, a welder who could cut it in half, a supply of concrete blocks to build the abutments, and a big piece of equipment to play in the dirt with. Bernie Lee, and Reuben Budd managed to lay the block. Mr. Budd mixed the mortar. They must have poured some sort of footing but I don’t recall that part.

Poor Mr. Budd. He was  just a farm hand. I’m sure he was paid very little in addition to the use of the rather wretched tenant house he lived in with his wife, her parents, and 3 children. There was Leslie, who was about my age, and Bonnie, a little younger, and an older son who was quite severely mentally disabled. Another son had gone into military service and was no longer at home. I seem to remember Mr. Budd’s pay was $70, although I have a feeling that might have been every other week. Whatever it was, it wasn’t much.

So here is this poor overworked man, off on his lunch break on what I remember as a drizzly day. Gary Lee, Bernie’s 8 year old son, and I, also about 8, had this bright idea to play a joke on Mr. Budd. He had left his big high rubber boots at the bridge. We thought it would be a good joke to put something into his boots as a “funny” surprise. Leslie looked on, totally speechless, as we put some lime and water into one his father’s boots. He was probably fearing for his life and uncertain how to deal with his dad’s bosses’ son’s prank. I think he ultimately went off and hid.

After the lunch break, things were not thought quite as funny by others. Mr. Budd was very angry but was caught in a similar situation to his son. We would have been whipped were we his responsibility, but, as things were, he opted not to beat his bosses sons. But he was pissed. I’m not sure that my father was ever told, but Bernie Lee made it very clear to us how HE felt about it. I was beginning to felt pretty badly about the whole thing even before Mr. Budd put his foot into his boot. I did apologize to him for the incident, but I know he would have preferred satisfaction of another form.

The bridge got completed with beautifully welded pipe railings. It was a fine bridge. The only glaring oversight in the design was that there were no approach ramps. So, for the next 25 years, there was this jarring thud as every car wheel mounted the edge of the bridge span.

The Pond and the third Bridge

In the mid 1980’s, I decided to build a pond in that wet front field, which had continued to  absorb tractors, not only in the marsh but in the remnants of the drainage ditches, the scars of which the field still bore. It ended up as a  3 1/2 acre pond, with the upper end of starting right at the bridge.

The 1962 bridge was starting to come apart by then. The span was shifting off the side walls, probably due to vehicles continually pounding into it. A new bridge was undertaken. I had always admired the beautiful 3 span stone bridge in the neighboring field that had been built for Robert Downman back in 1915 (probably designed by Irwin Fleming). In 1988, I set about to create a miniature  version of that stone bridge.

The concrete substructure was completed and the stone facing was brought up to a point above the water line, but it was never finished. I injured a disk in my back while placing the concrete for the bridge. I had it in my mind that I wanted to do the stonework on the bridge myself, but it took over a year for my back to fully heal and I never got back to it.

The spillway on the dam washed out in about 2005 after a fallen tree broke the overflow pipe allowing the outlet to clog. Repairing the dam, reopening the main driveway and finishing the bridge are definitely on the list for the July 15, 2017 party preparations. Luckily, I think some of those blocks are still around. 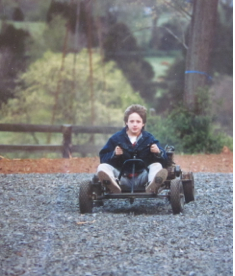 Sadly, soon after we purchased these 2 vehicles (one from a yard sale and the other out of the back of someone’s garage), Emily’s two-seater kart was stolen from the farm shop. She was devastated. There was no one living on Green Mont at the time and break-ins had  became a fairly regular occurrence. Lots of things were stolen, but no one ever stole any of those blocks.