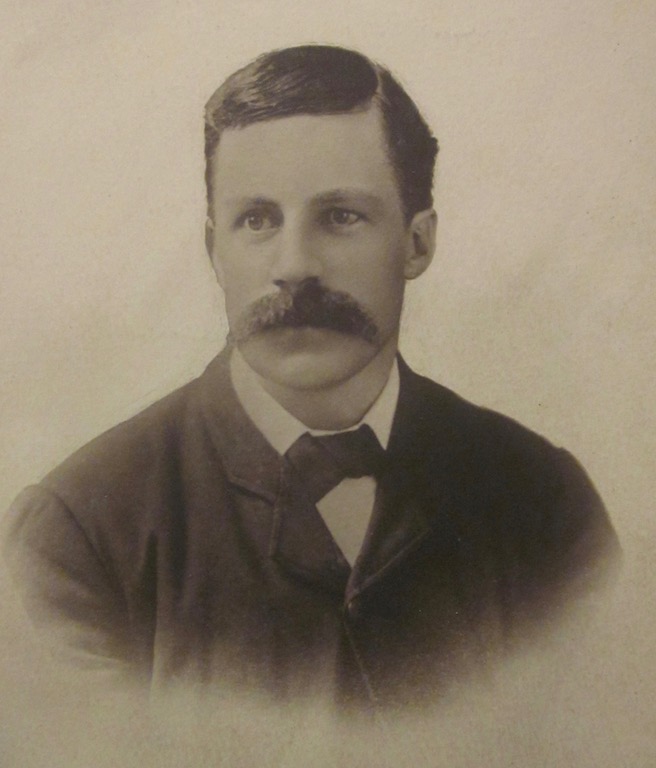 This picture of R. B. Lee Fleming was taken c1882, about the time of his marriage to Harriot Jane Downman of Warrenton, Virginia. He was 33 years old. She was 22.

Thomas Fleming emigrated to South Carolina from Castleblaney, Ireland in 1798 when he was 13 years old: his father had remarried and all the children from his first marriage came to Charleston SC to live with their Aunt, Mrs. Alexander Henry (Elizabeth Fleming).

In 1810 Thomas (25) was an adjutant of the 8th Calvary, South Carolina Militia. Several of his S.C. Fleming relations were involved in shipping. Thomas followed suit. His company, Fleming and Ross, owned ships and imported from the West Indies coffee, sugar, molasses, salt, ginseng, smoke root, and their ships did business in Philadelphia and Liverpool. His partner, James Ross, was from a prominent Scottish family. Thomas was also involved in banking and insurance, and was a churchman. Thomas (at 29) married Clarissa Tilghman Walton (19) on May 12, 1814.

Robert Fleming Fleming, M.D., their second child (and father of Richard Bland Lee Fleming) was born Nov. 18 1816. In 1826, when Robert was 10 years old, Thomas, dissolved his partnership of Fleming and Ross and moved his family to Philadelphia where he was one of the founders of The Pennsylvania Banking and Trust Company. Robert received a medical degree from the University of Pennsylvania. In 1847, Robert (then 31) married Mary Elizabeth Lee (20), the daughter of Richard Bland Lee II.

Among Thomas’s business ventures was a large share holding in the oldest lead mine in the United States; The Mine La Motte at Fredericktown, Mo. In 1848, Thomas Fleming sent two of his sons, Robert F. Fleming and his younger brother, Thomas Flinn Fleming, to Missouri to run the mine. Robert Fleming Fleming traveled to this very primative outpost with his young wife. Their three eldest sons, Richard Bland Lee Fleming (b.1848), Thomas Fleming (b.1851) and Robert Fleming Fleming Jr., “Uncle Rob” (b.1858) were born in St. Louis.

Clarissa includes a footnote, that “(Mary Lee Fleming’s) sister, Julia, used to visit her at the mine. The ladies, no doubt, had to have some outside diversion. We have a letter saying they had been to St. Louis to the races (nearly 100 miles away from the remote mine). They called each other “Triss” and “Bunty”. Their father, Richard Bland Lee II, U.S. Army was in command at Jefferson Barracks, Mo. (near St. Lewis).”

Clarissa describes Mine La Motte as really being on the frontier. Quite the extreme from Philadelphia. R. B. L. Fleming told his daughter, Clarissa, that his father, Robert Fleming, went out of the house one night and a panther jumped on his shoulder.

The family returned to Philadelphia in 1858 prior to the War and prior to the birth of their three younger children; Alfred Walton Fleming (b.1861), Julia Prosser Fleming (b.1863) and Clarissa Tilghman Fleming (b.1868). R. B. Lee Fleming spent his high school years, from age 13 to 17 (1862-1865), at St. Timothy’s School outside of Baltimore, Md.  There is a picture included later that shows him in his “Yankee” style military school uniform.

The War, and the path to The Plains, Virginia

Robert Fleming purchased the Lee-Fendall house in Alexandria, Va in 1870 and moved his family there from Philadelphia. He died the next year on March 16, 1871 at age 55. His wife, Mary, was then 44. Thomas Flinn Fleming had died 2 years earlier in 1869 at the age of 49. I have found no record of how, or where, Thomas died. (I wonder if it was lead poisoning?)

Clarissa Fleming’s account refers to a letter from Robert Fleming to his father, Thomas, dated May 29, 1871, where the figure of $450,000 due on a part of the sale of Mine La Motta is mentioned. Thomas had been dead for 16 years by that point. And, there is no other Thomas Fleming, either father or brother, alive at that point. Perhaps the letter was to Mrs. Thomas Fleming (Clarissa Tilghman Walton Fleming) who lived until 1875. And, Robert had been dead for a few months by then. I’ll have to look for this letter. Maybe it’s in Clarissa’s papers. Details, details…. a letter from one dead man to another.

One of my reasons for delving into all this was to learn more about this mine, which Sandy Jeffries ( my brother-in-law) brought to my attention last fall. We were having a discussion regarding the Fleming’s fortunes and how they managed to hold on to so much of them after the fall of the south and it’s entire financial structure. The fact that so many of the family’s holdings were in the north, whether in Philadelphia or Missouri, must figure large. I had never “gotten” this Northern aspect of what I had previously thought of as a primarily Southern family. Regardless, this mine was certainly a key asset. A lead mine must have been a heck of a money maker during the Civil War, considering all the bullets fired. And, as Clarissa says in her notes; $450,000 was “lots of money for that day!”

What I also had not “gotten” was that R. B. Lee Fleming, my great-grandfather, spent his early life at a lead mine in the wilds of Missouri. He then spent his adolescence in sophisticated Philadelphia, when not in school at St. Timothy’s. He was 22 by the time his father had purchased the Lee-Fendall house and moved the family to Alexandria, Va. R.B.L. Fleming spent at least some of the ensuing years in Charleston, South Carolina where he was in the Washington Light Infantry. In 1877, when he was 29, his mother purchased “The Home Tract” (soon to be named “Green Mont”) where he would make his home.
Mary later bought two other farms in the area, but I can only locate one of the. On the 24th of December, 1885 she purchased a tract known as the O’Bannon Farm along with part of another tract; a total of 290 acres in all. This was for her 3rd son, Robert F. Fleming II. This farm is now part of the equestrian facility “Great Meadow”.

Clarissa Fleming notes (on the back) that “(R. B. L. Fleming) is wearing his Washington Light Infantry cap, which, in Charleston, SC, was like Squadron A was in New York.” Richard Bland Lee II resigned from the U.S. Army on May 9, 1861, and was appointed a Lieutenant Colonel in the Army of the South. He was 64 when he took up his Confederate commission.

Richard Bland Lee Fleming was in High School at St. Timothy’s near Baltimore, wearing a “Blue” military-style school uniform at the same time that his maternal grandfather, Lt. Col. Richard Bland Lee II was wearing “Gray”, fighting for the Confederacy. What a time in history that must have been.

I have been confused on many elements of this story. For instance, I had always thought that Mary Lee Fleming had lived at Green Mont with her eldest and his family. My brother Bill’s notes indicate that she maintained a house in Alexandria and then, in 1879, another house in Washington, DC.  I had a much more hand-to-mouth sense of this Fleming clan settling into The Plains, post war.

And, there is, still, the mystery of the missing farm; the farm purchased for Mary’s 2nd son, Thomas Fleming, the father of W. H. Irwin Fleming. I believe that farm, whatever it was called, may now be a part of “Gordonsdale”, a fairly large farm just outside The Plains heading south towards Warrenton.

Much of this has been assembled from Clarissa Fleming’s 1966 “Notes on the Fleming Family”. That book focuses on Thomas Fleming 1785-1855 but contains records that date back to the Battle of Hastings. I have a personalized copy given to me by Clarissa. I would be very happy to reproduce any parts of it that others might like to read (as I am fairly sure it is out of print). Many other bits and pieces have come from  notes on my brother Bill’s (William F. Rust III) family web site site. which contains many family treasures.

A favorite story about R. B. Lee Fleming

I have a favorite story about my great grandfather told to me by my father, William F. Rust Jr.  To better tell that story, however, I first want to tell one about his younger brother, Robert Fleming.

Uncle Rob lived his entire adult life at Green Mont. I’m sure he showed his gratitude for this never-ending hospitality in many ways, but one of them was by purchasing a “fancy” new car for the family every few years and taking care of all of the car’s expense and upkeep. In those days, owning a car was a big deal.

Uncle Rob would never ride in this car. He had another car; a beat-up old model “T” Ford that he drove around in with Clarissa, his very favorite niece and nearly constant companion. I remember Clarissa telling me how she would ride along standing on the running boards so she could hop off to open and close the farm gates when she and Uncle Rob drove around; something that Mike Harris did for Clarissa later on.

Here’s where we get around to my favorite story about R. B. Lee Fleming. He was the other person who would never ride in the family car.  His reasons, however, were somewhat different. As kind and tolerant as I understand he was, the household must have been fairly trying at times, with 6 girls and a boy and a seemingly never-ending stream of guests and company. I guess the thought of all of them piling into the car, no matter how short a ride it was, was just not very appealing. He choose, instead, to take the horse and buggy whenever he went into town (probably about once a week). I have heard that these several hours of peace and quiet, his horse plodding along at a slow walk down the shady lanes while he puffed on his pipe, were very enjoyable and special for him.

I have had a small framed copy of this photo of R. B. Lee Fleming for ages. This has long been my image of him; gazing down, in seeming reflection. It is the image of him I have always associated with those cherished quiet buggy rides into The Plains, alone. I can see him now; the reins slack, clip clop clip clop, gazing peacefully at the road ahead, smoke from his pipe trailing off

I come to find out that this picture was cut out of a larger photo. In the full image, he was actually staring appreciatively at a dog, with some jaunty young woman standing by. Just goes to show you.

I don’t know where this picture was taken. If it’s at Green Mont, I don’t recognize the spot. And I don’t know who the young woman is. Doesn’t look like one of the Flemings. R. B. Lee Rust tells me that he has R. B. Lee Fleming’s  walking stick. I asked him to send me a picture. Maybe it’s this one?

Marloe Woollett:  According to my mother, he always got to the train station HOURS ahead of the scheduled departure time, so in our family, we had the expression of “Being a Grandfather Fleming” when anyone got anxious about leaving to go somewhere.  I confess, I am a hopeless Grandfather Fleming, always getting places too early!!

Please send me your RBLF stories.