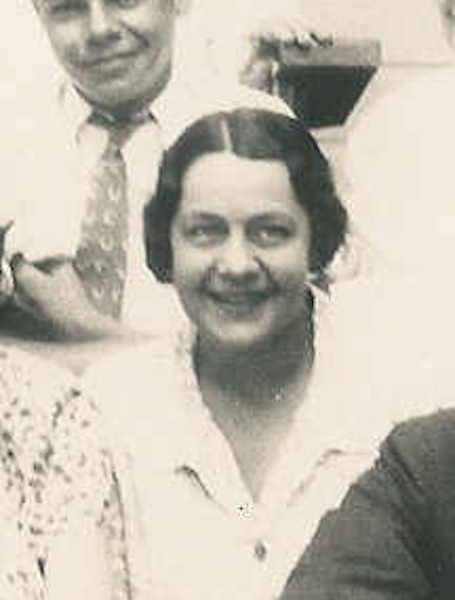 The photo above is Harriot on July 4, 1936 from a family portrait.

Harriot Downman Fleming , namesake of her mother, was perhaps the quietest and gentlest of the sisters.

Like several, if not all the Fleming children, her formal education started at Green Mont. At the appropriate time she went off to finishing school in Washington. I think Grandfather must have been an equal opportunity educator, for I think the girls were dispersed to several schools in D.C. and Baltimore. I also believe Aunt Harriot served as a house mother for a short period thereafter. Probably Roberta (Rust)Jeffries can flesh this out.

At some point in the twenties she approached her father for a loan of $2000 to open a dress shop in NW Washington . My guess is that he may have been something less than enthusiastic about this venture, but he relented with the firm provision that  this was a loan, not a gift. She was very proud of the fact that she repaid it all – ‘to the last cent !’ Her partner in this venture was Agnes Shands – possibly a distant cousin, definitely a lifelong friend. Shands and Fleming survived the Great Depression, prospered during The War and ensuing boom, and supported the partners until they retired. 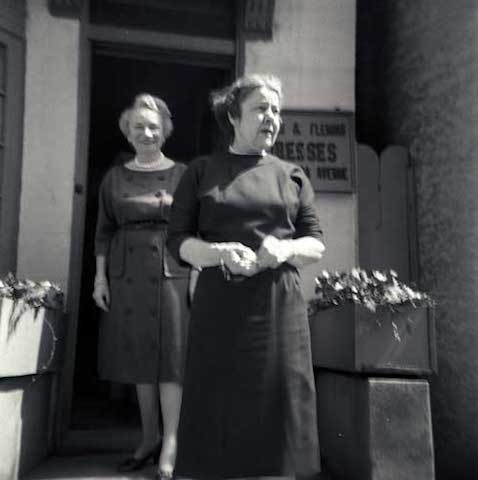 During The War Harriot commuted to Green Mont on weekends. She, able to change her city hat for country wear without missing a stroke, took over the gardens, both flower and vegetable. I never remember a hair out of place, nor a drop of perspiration. At this point Uncle Lee was running the farm, Aunt Roberta the house, Aunt Clarissa her farm. Everyone had a place in the Green Mont mosaic. Although this was never said, I think Aunt Harriot was a source of stability for Uncle Lee, and felt strong responsibility for Amere

We lived in Boston at the time. Mother and I took the train down to Union Station and then a cab over to Shands and Fleming for lemonade and cookies. Then off to Green Mont.

Random notes regarding Shands and Fleming: Aunt Harriot always gave her sisters slips and nightgowns for Christmas and birthdays. They always re-gifted to each other with the inevitable result that eventually the gift would make full circle.
Another: She cut the end off her thumb splitting kindling on the back porch of the shop (?)
Final salute: I spent a lot of time in DC during the 80’s; one day I happened to walk by the shop, and stopped in to introduce myself to the owners. Nothing had changed … a real tribute to the two wonderful women who brought it into being fifty years earlier ….
As noted earlier, there was a seismic shift in the Green Mont dynamic when Amere died in late 1945. Aunt Harriot still commuted from DC on weekends, but now to Homewood. We all remember that she moved there permanently at some point. The sisters (Clarissa and Harriot) seemed to enjoy each others company for the next 25 years or so.

Household chores were divided equally; they alternated cooking and washing up.
Aunt Harriot planted and tended shade loving flora around the fish pond. Aunt Clarissa made sure the lawn was cut.
They both shopped at Safeway, both served on Altar Guild at Grace Church , and although they sat together in the same pew used by The Flemings since the Church was built, I am sure they often drove separately. They each had their own stuff ; I doubt it ever occurred to either that they could share things .

Aunt Harriot never married. This has always been a mystery to me. She was certainly attractive enough. I have kept a photograph taken when she was probably in her fifties.
The scene was a fancy dress party; she was talking with a nice looking man. I have no idea who he was, but significant enough to have been on her bed side table as far back as I can remember. I find this sad. She would have been such a wonderful spouse and mother…

The last few years were terribly wearing. Aunt Clarissa was house bound by arthritis and possible senility, shifting all responsibility to Aunt Harriot. Although unimpaired herself, she made her bed on the sofa in the living room to hear Clarissa if needed. (Clarissa had not been able to go up and down stairs for some time and had set up a bed downstairs in the Library)
Thankfully Henry and Cindy, Lee and Wendy Rust were at Green Mont full time to look in on them constantly.

Life that year was hard. The Fleming motto is “Let the Deed Show“. Harriot Downman Fleming lived it to the letter. She is missed.

Wendy Baer (Rust): I googled Shands and Fleming Dress Shop and 8got this, excerpted from Clara Bolling Fowler’s obituary from the “Washington Post”

“…Mrs. Fowler was a graduate of Western High School. In the 1960s and 1970 s, she worked at her sister’s dress shop, Shands and Fleming, in Washington.”

When Harriet was closing her house, she gave Cindy M and I some wonderful dresses she said came from the New Orleans.  After “season” they were sent up north to the country cousins. I wore one to Henry’s California wedding rehearsal dinner. Margaux and I still have a couple. They are beautifully hand made, with lovely fabrics.

If any one has anything they would like to add  about Harriot, a story or maybe just a memory, please email it to me and I’ll post it. It would be so appreciated. Thanks